As an adult, I’ve never been one to advocate for avoiding content as a matter of ideology. As a lover of entertainment, I only skip certain things out of taste, not because the performance/subject/piece espoused thinking that was contrary to mine. As such, I’ve never been into boycotting something just because I didn’t agree with it. Sure, I might not buy the product or frequent the establishment anymore, but I wouldn’t go around and convince other people to do the same. Yes, it’s every American’s right to boycott something, but it also smacks of totalitarianism.

“Man, these chicken sandwiches taste great! What’s that? You think marriage should be between a man and woman? Oh, in that case, I’m going to make sure no one eats here ever again!”

After today, I think it’s time to give boycotts a second look. Beyoncé (wife of rapper Jay-Z) tweeted this image after Obama was reelected: 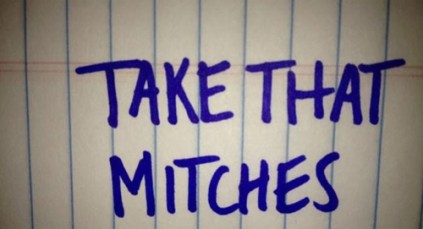 Her husband had done the same in a performance the night before.

Liberals are insufferable. They can’t even win graciously. At the end of the day, even if we can’t come to terms with our political opponents, we must always remember that they are still Americans and deserve the modicum of respect that comes with being countrymen. To essentially call them “bitches” because they disagree with you is a new level of low. It’s time to stop giving these people our money. They don’t respect us and they despise what we stand for and believe in.

This is yet another reason why this election was so important. Ever since 2000, the Left has slowly become more and more emboldened into revealing the assholes that they are. Yes, it was mainly the comedians who went after W. By and large, that was expected. But now we have A-listers like Morgan Freeman outright calling TEA Partiers racists. We have Samuel L. Jackson railing against God that the GOP was spared by hurricane Isaac. Now Beyoncé calls half the country “bitches”. These entertainers are not D-listers. They are still relevant. They don’t have to sink to the depths of Roseanne Barr or Cher and blast hateful screeds to get attention. The fact that Freeman, Jackson and Beyoncé feel completely safe in their careers to behave this way is very telling about the mood of the country.

As Rush Limbaugh said today: In a nation of children, Santa Claus wins. I don’t know how you can beat Santa Claus by being the Workshop Elf who tells the child that if they study well and work hard that they too might be able to build these wonderful toys, when the child can simply go to Santa and demand the toy the Elf made.