This week has been an undeniably good week for Mitt Romney.  But, I do know that there are people out there who are still very worried about the results of this election (rightfully so since the stakes are so high), especially if you read the more “math” driven sites like Intrade or 538.com.  After a stint of uncharacteristic negativity, I have become very bullish on Mitt Romney’s chances.  Romney is now ahead Nationally according to RCP but we all know that it’s the battlegrounds that will decide the election.  So, I try to balance the “math” with some observations I made reading about the election and it is because of these observations that I believe.

Let’s start with FL.  For whatever reason, FL tends to poll more Dem than it actually votes. This happened in 2004 and was +6 O at this same time in 2008.  Despite that if you’re reading RCP the 2 established polls taken the day after the debate resulted in +2 and +3 R. The NBC poll taken 4 days before the debate was +1 O taken at a time when R was admittedly not doing as well nationally. There is one poll by UNF +4 O was taken over a 10 day period both before and after the debate is most likely an outlier and doesn’t even publish its methodology. If you remove that one poll and considering the history of FL I believe that it will break Romney.

NV goes Romney.  Other than the one Dem poll, the most recent polls (including post debate polls) have shown this state as neck and neck. Considering the terrible economic shape NV is in and the large Mormon population this is easily a toss up but advantage Romney.

WI I put in the Romney category for three reasons: 1. The post debate polls have shown a tightened race.  2. Scott Walker survived a very negative recall there and 3. I believe that tomorrows VP debate will enamor R&R in the eyes of the WI voters.  In fact I believe that unless O stems the tide this state will ultimately go R.

OH is trending R right now in my opinion.  Another state that O needs to try to stop the momentum.  Post debate this is a solid tossup, three things make me believe that O is in trouble here.  1. Early voting started right around the first debate.  2. Early absentee requests have shown a +9% change towards Republicans, since McCain actually won the vote on election day this is a huge development.  3. Registered voters are down approximately 300,000 from 2008.  Considering the polls showing a much higher enthusiasm on the Rep side most of this loss (if not almost all) is on the Dem side.

Using my map and my observations on the race there are quite a few scenarios that result in a R win. I suggest that if the election were held today R would be the winner.  Here is my Electoral map.  Please let me know where I am wrong I love a challenge… 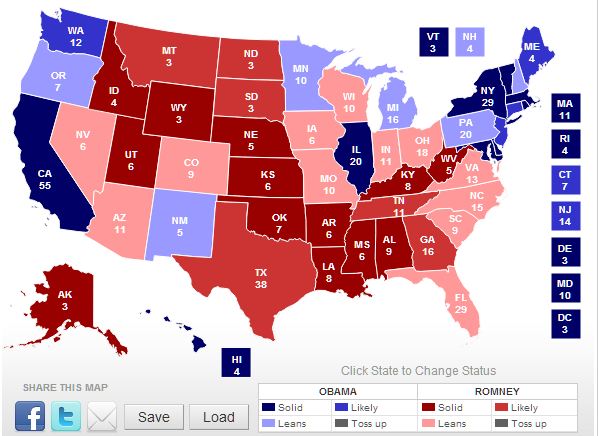 Be the first to comment on "The Way I See It"