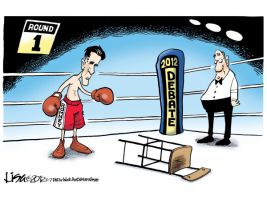 Remember a few weeks ago when a grizzled legendary actor had the audacity (I was using that word way before Obama wrote his book, by the way, really…) to trot out an empty chair on stage with him and then proceed to talk to it?  Remember when he went on to give what arguably was the most entertaining and true indictment on the Obama Presidency?  Remember what the punditry had to say about the performance?

How sad that what amounted to the most practical and honest speech of the night was attacked by the left (MSM included) as the schizophrenic ramblings of an old tired confused senile senior.

Who knew that a few weeks later he would be vindicated in the most public way?  Who knew that when Romney came to debate Obama on an October night in Denver that the empty chair would show up to debate him instead?

Romney looked fresh and ready for the battle, smiling and his hair in rare form.  Obama looked like a man already beaten, tired like a bloated boxer who trained too little for the big fight.  From the start, Romney looked nimble and agile moving from topic to topic with dexterity.  Easily brushing aside the charge that he would give a $5 trillion tax cut to the rich just to transfer the tax burden onto the middle class.  Obama rarely on subject seemed to ramble and looked down quite often as Romney launched volleys at him directly.  Obama never recovered from the forceful defense Romney made of his tax plan.  Even so Romney looked like he was prepared for all the attacks lobbed at him from the Obama campaign during the previous months.  Attacks like the 47% video that Obama conspicuously never even mentioned!  After the dust cleared there was one clear winner… 67% said it was Romney.

Afterwards I posted this, “Is this the beginning of the end?”  Mostly just to see who was paying attention, kinda give a dig to the leftists in the social network universe and perhaps see what kind of reactions I would get.  The first replies were about as cryptic as my post but then the floodgates opened.  It seemed that all of my liberal friends were called to defend their bruised champion.  One even felt the need to give me 4 to 1 odds if only I would engaged in a wager with him on the election…  The over reaction to the defeat only confirmed what we all knew, that it had changed everything.

So was the debate the beginning of the end?  I hope so, I believe so… I had felt four years ago that for whatever reason the electorate was waiting for a reason not to vote for McCain but they were waiting for a reason not to vote for Obama.  McCain gave them no such reason.  His mealy mouth above the fray approach only made him look weak.  And so the same this time around, Obama is nice enough the voters say, we can stand him another four years.  What the right needed (and the general voter too) was someone who would fight, would articulate a clear difference, would show that it wasn’t about speeches and smiles, would show that they were ready to Lead.

In one night in October, Mitt Romney did that.  He performed like a man who would be President, like a man who would lead.  We still have a few more days before election day and there will be many more shenanigans to come but today in a flash Romney’s opponent disappeared only to be replaced by the same empty stool that stood beside Clint just a few short weeks ago.