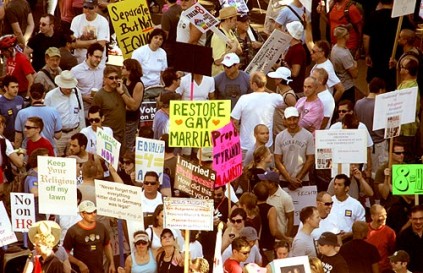 "Help us shove our alternative lifestyle in Christians' faces!"

You know, I totally empathize with gay people. The lifestyle isn’t for me, but I don’t bear them any ill will. The problem here is that we all have to live in the USA and therefore need to find a solution that everyone can live with. I know this goes against the spirit of this political site, but the only other solution I can think of is for one side to die, which isn’t practical.

So I think it really comes down to finding out if each side really believes its own bullshit. Would gays really be happy with equal rights under a different name, like “Gay Unity” or something like that and let the religious folk and all Black people enjoy their “marriage.” I don’t think so, because I believe that a big part of the gay agenda is to force acceptance of their lifestyle on religious people, screaming, “I can have exactly what you have and your god can’t stop me, because the government is more powerful!” Then they’ll dress up as nuns in sexy lingerie and march around in the Gay Pride Parade, enjoying the double standard that Blacks take advantage of: I can make fun of you, but if you make fun of me, you’re a bigot.

On the other side, obviously, Christians don’t want to share a street with gay people let alone the sanctity of holy matrimony. I do believe, however, that the real motivation behind the pro-Prop. 8 movement is purely punitive and not because Christians hold marriage as this sacred thing that must be defended at all costs…or at least until differences become irreconcilable and then it’s time for DIVORCE COURT! The bottom line is that religious people and Blacks hate gays. Gay people are a threat to their core belief system and to their way of life. This situation will never be resolved until — as I said before — one side dies.

So what’s the answer here? There is none, but what we can do as a society and as a country is to get government the hell out of this situation. Get rid of “marriage” entirely and give everyone the opportunity to receive Civil Unions that are equal to all. Then, if you’re religious, you can go to your church and undergo whatever private ceremony you feel you need to in order to make your union holy. Then gay people can do their own thing. Sure, this won’t do a thing to ease tensions, because of the ulterior agendas on both sides, but at least it will keep gripes personal instead of public.

Then, of course, there’s this:

You know, I’m a fan of Jack Black and John C. Reilly and of musical theater as whole. I also thought this one was particularly well done. I just think that the argument is kind of lame. What point are they trying to make? Christians are wrong on their religious stance on gays because they pick and choose? Wrong. Let’s liken the Bible to the laws of our society. Let’s now say that “don’t eat shellfish” is like a highway speed limit set to 65 mph and “don’t be gay” is like “breaking and entering.” Just because someone decides to speed on the highway, doesn’t mean we should criticize them for not breaking and entering someone’s home. Instead, we should criticize them for speeding. So in reality, we shouldn’t insult Christians for being closed-minded. Instead, we should insult them for not being strict enough with their faith.

On a semi-related note, you don’t need religion to hate gays.