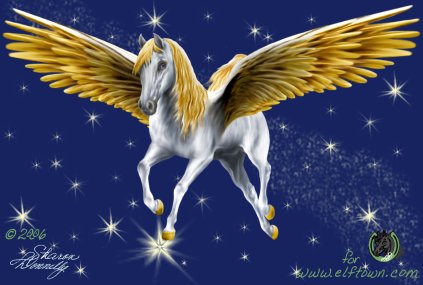 “He’s OUR President, you should support him!”

After a long and arduous search I happened to stumble upon a creature of great myth and legend, a being so rare that many people have said that it doesn’t exist. But, I am here to testify that I have seen one and it does very much exist, and I survived the encounter with barely my wit intact.

This legendary creature is no other than the True Moderate. (At least that’s what he claims to be)

The True Moderate is so rare my friends that henceforth I will refer to such beings as Pegasus, Pegasi for plural. The quotation at the beginning of my post comes from the mouth of one such Pegasus, what can I say I surround myself with many personality types with many ideas, some less baked than others. This man claims to be a true Reagan Democrat, he had voted to Bush twice but just couldn’t bring himself to vote for another Republican after the “debacle” of the last 4 to 8 years.

“Give the other party a chance.” he says, “they can’t be any worse!”

Believe me, I want Mr. Obama to succeed and bring this country back to the greatness it was once at. I want to support Mr. Obama in his legislative ventures. He will be not just OUR but MY President and I want only good things for him…. I just don’t have much faith that he will do anything that I would consider good for this great country. I guess it is possible that his platform during the campaign was just BS to get him elected and that he’ll miraculously become a Conservative while in office but this is already becoming a pipedream.

Pegasus says, “You’re just too partisan, why are you wishing bad things on him!”

Again, I told him, I don’t wish ill will towards our president elect and I hope that he leaves his rhetoric behind and does all the right things but I KNOW the Liberals ideas and I FEAR that he’s way too liberal for our own good.

I guess what I’m saying is that looking at the political landscape I just don’t see much improvement for the future from the President. Combine this with the Nancy Pelosi led House of Representatives and the Harry Reid led Senate and the future looks even worse!

In many ways I agree with the Pegasus.  It really is important to hope and wish well of our President and I wanted to believe so badly.  Only yesterday, I read that after a massive and so far ineffective bailout for the banking industry, Mr Obama has already (prior to taking the oath of office mind you) proposed a massive $850 billion “stimulus” plan for the next couple years.  So it begins…. Thank you Pegasus and hope YOU can keep YOUR well wishes alive for the duration of the next Presidential term.